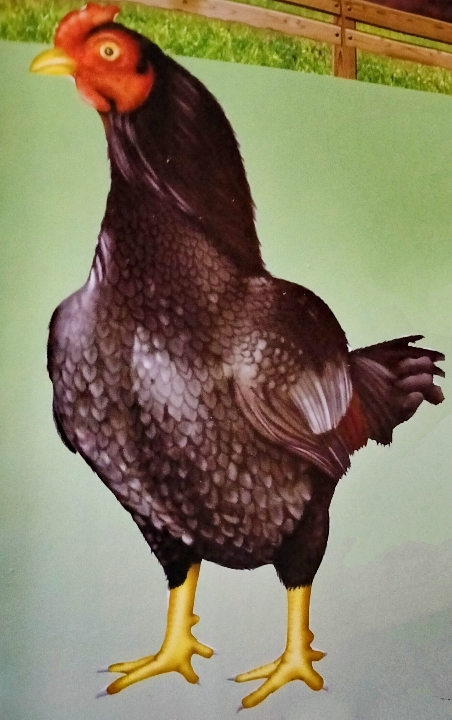 Chicken is the most widespread domesticated animal in the world. They are usually mass-bred for meat and to produce eggs, but are also commonly kept as pets in some parts of the world.

Male chickens are known as roosters while female chickens are called hens. Chickens are gregarious (social) birds and live in large flocks. Chickens like to lay eggs in nests that already contain eggs – something that is often encouraged by farmers with the placing of fake eggs.

Domestic chickens cannot fly long distances, but those raised on open-air farms generally have the feathers of one of their wings clipped to prevent them from flying over boundary fences.

The Cornish hen is widely bred for the poultry meat industry. They were first bred in the county of Cornwall in England and were known for their large amount of white meat and smooth and fine texture. They have short feathers, stuck closely to their body.

These birds need adequate shelter during winter, as their feathers do not provide enough insulation to keep them warm.

*Chicken is one of the most commonly used meats in the world and most parts of the bird can be used as food.

It is believed that the Dorking breed of chicken was originally bred in Italy during the reign of Julius Caesar. It was later introduced to England, where the breed was reared commercially. It is considered to be the purest breed because of the five claws on its foot, rather than the usual four.

This bird takes up to two years to grow to a size suitable to eat and can live up to seven years of age. It needs to be given good quality feed to achieve a good weight and size. The Dorking chickens are foraging birds and require a large amount of space to move around in. Cornish hens have short stocky bodies and need sufficient exercise to develop their muscles.

Feed on: Grain, grass, and insects.

Vet and Vaccination for Pets

The turkey is a large bird, found originally in the forests of North America. Today it is bred commercially on farms around the world and is best associated with Christmas celebrations.

There are two main species of turkey. The Wild turkey and the Ocellated turkey. Wild turkeys are good fliers and also relatively cunning birds. They are identified by an almost featherless bluish head with a striking red throat in the males. The head also has fleshy growths called caruncles.

Wild turkeys live in woodland, where their extremely sharp eyesight allows them to spot danger and adopt a quick means of escape. In the wild, turkeys may nest at the base of a tree during the day, but by night they move higher up and roost in the branches. Wild turkeys have a very striking appearance with a, particularly dense plumage.

The domesticated turkey is raised commercially for its meat and is a descendant of the wild turkey. It is reared extensively in temperate parts of the world.

Modern techniques in farming, coupled with high seasonal demand, have made turkey farming a large-scale operation; the bird is most commonly associated with Christmas celebrations as being a bird large enough to feed gathered families.

Traditionally, turkeys were bred for their meat during Christmas. Now, they are produced throughout the year on a large scale. They are reared in large-scale sheds or barns. Turkeys reared for meat are usually hatched by artificial means.

Most commonly turkey hens are now artificially inseminated to fertilize their eggs, as the physical development of male turkeys largely makes them incapable of breeding. Using artificial incubators to hatch eggs allows breeders to control the number of birds and rear them according to demand.

Color: White with redhead and neck.

Donald duck, the famous fictional character, is a Pekin duck. The classic white Pekin duck is a very popular duck breed on farms. It is quite hardy and has a mild temperament and is easy to train, domesticate, and pet.

It is a fast-growing duck and also an excellent egg layer, laying up to 200 eggs a year. But female Pekin ducks are not good brooders, so the eggs usually need to be incubated artificially. The Pekin duck is very popular as a meat duck.

Adult Pekin ducks are white and have orange-yellow bills, legs, and feet. The hatchlings have bright yellow-colored plumage with orange feet. The perkin duck has relatively weak legs and feet meaning it prefers to swim rather than walk around the farm.

The Rouen closely resembles its ancestor, the wild mallard. It is marked with similar color patterns with a green head, white collar, claret breast, and bright-blue feathers on its wings. It is a heavy duck and can weigh up to 5.5 kg (12 lbs).

It is not a good egg layer, typically laying only 100 eggs a year. However, it does yield a good quantity of meat known for its great flavor and is popular for this across Europe. It is used mainly as a roasting duck. Unlike the brightly colored male Rouen, the female is distinguished by warm brown colors.

The Muscovy is another large farm duck. It is the only domestic duck that has not been bred from the mallard duck. It has a bright red crest around its eyes, above the beak. Its feet are equipped with strong and sharp claws that help the birds roost.

It prefers to fly rather than swim. These birds are average egg layers, laying about 80-90 eggs every year. Their meat is leaner than most breeds of duck. The Muscovy duck has a dark-colored body with white wings and long talons on its feet.