Our land has given birth to children who have devoted their whole lives to the love of their homeland and its soil and to heal the sufferings of the oppressed, subjugated, and downtrodden people of this land, by giving them political consciousness and bringing them into the country’s political stream and Sacrificed their lives for revolution. Those who strive to lay the foundation of a prosperous society based on social justice, that too a society in which the people of God rule, not the upper classes. Where people sing songs of peace, love, and freedom and everyone has equal opportunities to move forward in life.

One such tireless, fearless, and beacon of light, Comrade Abdul Rasheed Sarabha, passed away on Monday, November 28, 2022, in Newcastle, United Kingdom, while passing away his illness of several years. He had the status of a senior socialist leader in Britain and Pakistan and was held in high esteem in progressive circles in both countries. He was the President of the Awami Workers Party, in North England and an active member of the Communist Party of Britain. 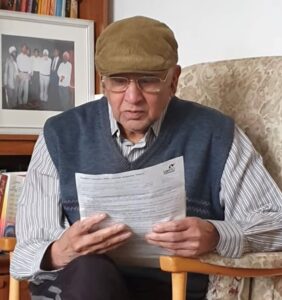 Comrade Abdul Rasheed Sarabha hailed from Pakistan and was a resident of Sarabha, a village in the Toba Tek Singh district. It was a coincidence that before migrating from India, his village was also called Sarabha, which is located near Ludhiana. This is the same village where Kartar Singh Sarabha, the hero of the Indian freedom movement against British Imperialism and a companion of Shaheed Bhagat Singh.

The grandfather of Abdul Rashid Sarabha, named Karam Elahi was a Number-Dar (Sarpanch of the village) of one section of that village, while the Number-Dar of the other section, which consisted of the Sikh population, was Sardar Badan Singh Grewal, grandfather of Kartar Singh Sarabha. Kartar Singh Sarabha was one of the youngest leaders of the Indian Freedom Movement, having formally joined the freedom and revolutionary movements at the age of 15.

He joined the Ghadar Party, a revolutionary party of United India, and soon became the mastermind of mutinies in the British Imperial Army. At first, he was deported, but within a few months, he returned and was caught inciting soldiers to mutiny in the Sargodha cantonment and was executed on 16 November 1915, when he was only 19 years old.

Abdul Rasheed Sarabha’s father, Abdul Ghafoor was employed in the Army and became a prisoner of war by the Japanese Armed forces in World War II. Later he was released and returned to India. Rashid Sarabha was born on May 1, 1934, in Roorkee Cantonment, where his father was posted in the Army. On that day, the workers of India and all over the world were celebrating May Day.

Rashid Sarabha’s family had migrated during the Bar era before the partition of the subcontinent and settled in the Toba Tek Singh district of Pakistan. After passing the matriculation exam, he went to Karachi to look for employment. He was influenced by the daily processions of farmers in his area since his school days, so one day he had the honor of listening to and meeting with famous revolutionary Urdu poets Habib Jabil and Faiz Ahmed Faiz at a literary gathering in Karachi.

He mentioned the activities of the Kissan Committee in Toba Tek Singh and that literary gathering became the starting point of Rashid Sarabha’s commitment to progressive politics. When he went back to Toba, he became regularly associated with the Pakistan Kissan (Peasants) Committee.

Later in 1962, Rashid Sarabha came to Britain and his heart wandered in his villages in Toba Tek Singh. He used to go to Pakistan every year for a few weeks and played an active role in Kissan Tehreek. He got British citizenship in 1967 but continued to visit Pakistan frequently for the next few years. Later, it was decided to hold the historic Kissan (peasants) Conference of 23 March 1970 in Toba Tek Singh, so he went to Pakistan for three months and sat in the office of Pakistan Kissan Committee Toba Tek Singh to help organize the village-to-village mobilization of peasants.

Soon he became the right hand of peasant leaders Chaudhry Fateh Muhammad, Zulfiqar Mahmood Shah, Chaudhry Muhammad Sharif, Farzand Ali, Barkat Ali, Sheikh Muhammad Qasim, Muhammad Sarwar, Chaudhry Muhammad Ibrahim, and others. He was put in charge of the financial affairs of the conference and after that historic Peasants Conference, attended by more than 300,000 peasants, workers, and progressive activists from all over the country, he settled permanently in Britain. His wife and only daughter also migrated to Britain with him.

After coming to Britain, he worked day and night in textile mills in Huddersfield, Wakefield, Sheffield, and Doncaster. Due to his earlier commitment to workers’ and peasants’ movements, he started participating in trade union activities. At that time, people who came from India and Pakistan for labour did not even know how to fill out the employment form. So, his house became a social welfare center for filling out employment forms. His wife Naziran Bibi and daughter Najma Parveen made it their mission to serve the Asians who came to help, comrades, and the trade union leaders of the area.

In those days, there was a lot of antipathy towards Asians in Britain, and bigoted, nationalistic natives still saw them as slaves from their colonial period. On the contrary, the anti-racism movement was also active, which was strongly supported by the British progressive organizations, especially the Trade Unions and the Communist Party.

Rashid Sarabha also started actively participating in the anti-racism movement. On the other hand, there was a movement going on in Britain, like all over the world, against the brutal attacks on Vietnam by American Imperialism. Pakistani-origin progressive intellectuals Tariq Ali and Dr. Jahangir Karim were among the leaders of this movement.

Tariq Ali was already known to him because his father Sardar Mazhar Ali Khan and mother Ms. Tahira Mazhar Ali were among the active leaders of the progressive movement of Pakistan and Rashid Sarabha had seen them at a peasant’s conference in Toba Tek Singh. Therefore, he did not have to cross any border in his contact and friendship with Tariq Ali. He soon became associated with the Vietnam Solidarity Movement and became one of the leaders of the movement, becoming Tariq Ali’s right-hand man.

Later in 1981 he left Yorkshire and moved to Newcastle. He set up a grocery store in the Blaydon area. He was just settling down in Newcastle, when his wife Naziran Bibi sadly passed away in 1982, leaving only his daughter Najma Parveen as his heir. After settling Grocery store, he became actively involved in the trade union and anti-racism movements. In textile mills, steel mills, and mining, especially coal mining, there were regular strikes due to working hours, daily accidents, and improper arrangements by the industrialists and the government.

One such historic strike in British history was the coal miners’ strike of 1984-85, which was centered in County Durham, adjacent to the parliamentary constituency of Belden, Newcastle, where Abdul Rasheed Sarabha lived and did business. The strike was one of the longest strikes by workers in Britain, a major industrial action in the British coal industry in an attempt to prevent colliery closures. It was led by Arthur Scargill of the National Union of Mine Workers against the National Coal Board, a government agency. This workers’ strike was crushed by the anti-people Tory government led by Margaret Thatcher, with all its might, and forced millions of workers and their families into starvation.

The British government claimed as a leader of democracy and human rights, stopped the salaries of the workers during the strike period to increase the economic pressure on the workers and forced the heirs of the workers to go hungry. Abdul Rasheed Sarabha made it his mission to fully support the miners’ strikers. Apart from home-cooked meals, he also announced free food items from his store to the families of the striking miners, who did not have the money to pay for food.

Thus, his grocery store became a charity shop, and he used all his savings to protect the hungry people. In this historic strike that lasted from March 6, 1984, till March 3, 1985, Abdul Rashid Sarabha and his daughter Najma Parveen forgot their liberty and rest and made humanitarian service their life’s mission.

When trade union leader David Anderson was first elected Member of Parliament for Blaydon, Newcastle in 2005, Rasheed Sarabha played important role in his election campaign. David Anderson MP also attended the early May Day gatherings organized by Sarabha Sahib and his comrades, and I also had the honor of being the stage secretary of those events for years.

Rashid Sarabha was devastated when his only daughter Najma Parveen died suddenly of heart failure on June 2, 2021. Sister Najma not only accompanied him in political work but also supervised the arrangements for our events in Newcastle. She was a brave, tireless person who loved everyone. She did a lot of work with special needs children and on the morning of her death, she was still with these children at their center that night.

Therefore, the role of Najma was key in Comrade Sarabha’s revolutionary struggle. She happily sacrifices her wants and needs throughout her life. Her husband Mohammad Sarwar, son Afraish Sarwar and Daughter Afsheen Sarwr always helped Rasheed Sarabha and Najma Parveen for organizing such events and generate funds for Daily Morning Star.

Abdul Rasheed Sarabha always played an active role in promoting and developing the progressive movement in Pakistan. He was also a prolific poet and columnist and used to write articles in ideological, political, and literary journals in Britain and Pakistan. He always played a role in the promotion and development of Urdu literature, art, and culture in Britain, and he was the soul of the Art and Cultural Association Newcastle.

While living in Britain, he was also active in the progressive movement here and was a member of the district committee, of the Communist Party of Britain. He had close friendships with Margaret and Comrade Martin Levy, a prominent Communist leader and editor of the Communist Review. In Pakistan, he was determined to unite the forces of the left and create a strong movement, which had been fragmented after the banning of the Communist Party in 1953.

In 1986, when the work started to unite the left parties in Pakistan to form a United Party, he was excited to work with them. When Awami Workers Party Pakistan was founded In 2012, after a series of mergers of left-wing Marxist parties, he was elected as its first president in North England. He remained a dynamic, fearless, and true revolutionary till his last breath and his struggle will continue to guide generations to come.