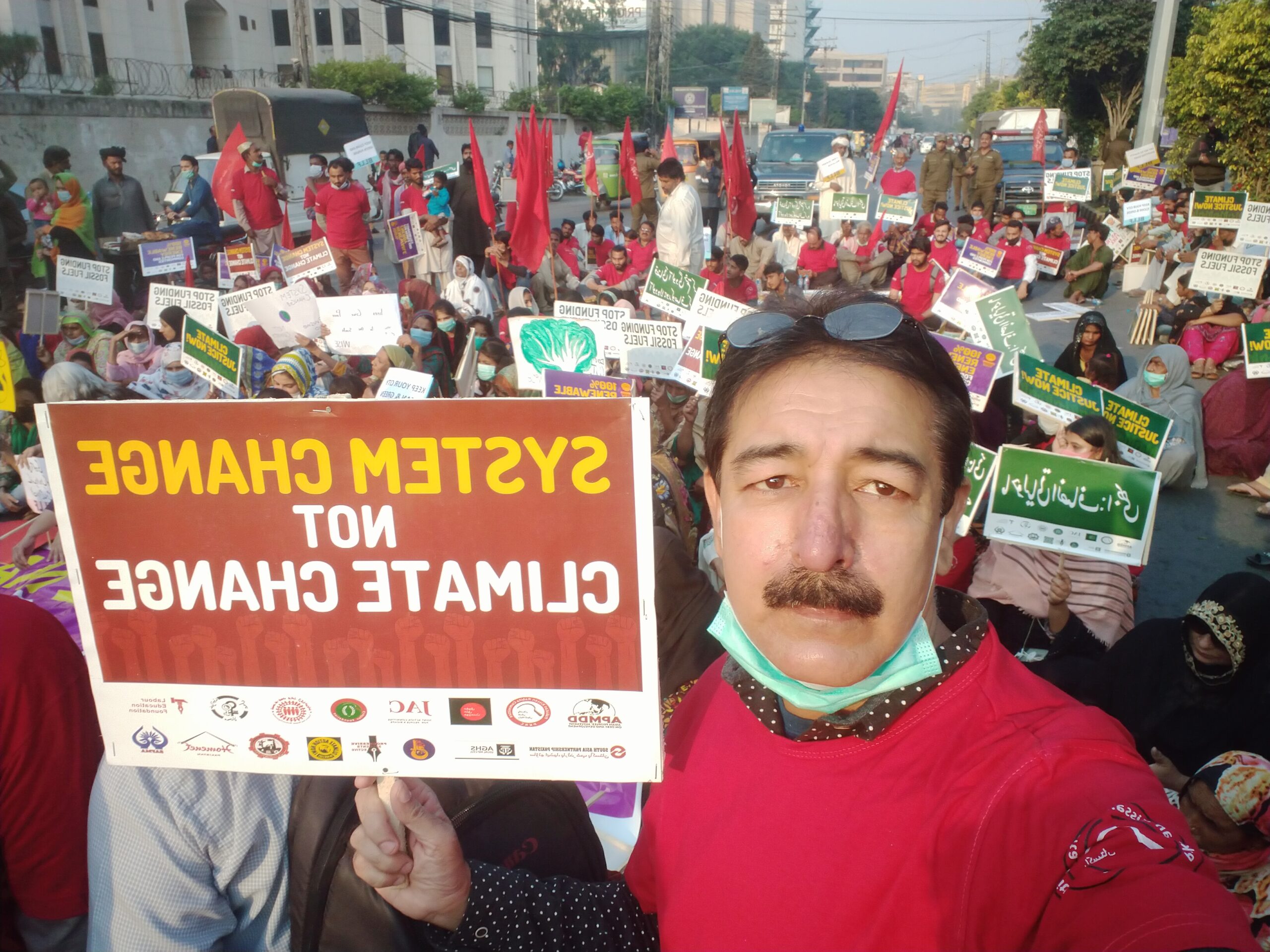 On the call of the Asian People’s Movement on Debt and Development, hundreds of climate activists participated in climate justice in Lahore, Pakistan. The participants mainly coming from civil society organisations, trade unions and social movements were demanding climate justice. The march started from Lahore Press Club, Shimla Pahari, and ended at Aiwan-e-Iqbal.

Farooq Tariq from Pakistan Kissan Rabita Committee said that fossil and coal-based energy projects must be stopped immediately. He added that gas and oil-based energy systems are not only expensive but also detrimental to the environment. He added that the prices of these are also increased on the demand of IMF, Farooq Tariq added that sustainable energy methods need to be adopted so that Pakistan becomes self-sufficient in energy.

Renowned environmental lawyer Ahmed Rafay Alam said that “the problem of climate change can’t be only left to political parties, he said that everyone needs to play their part. Rafay added that Pakistan still has to fulfill its promise of phasing out coal that it announced last year, we see that coal-based energy plants are still working and functional. He added that fossil-based energy systems are not only expensive but cause pollution as well. Adding that Pakistan has food sources of the renewable energy system. He stressed the need for alternative resources to produce energy.”

Spokesperson Haqooq E Khalq Movement, Aysha Ahmed said that “because of government’s negligence and lack of understanding of climate issues, the beautiful city of Lahore is now the most polluted city on earth. It shows that their Billion tree tsunami project as a mere tokenism did not address the climate change issue. She added that environmentally costly projects such Ravi Urban Development Project must be stopped and land grabbing in the name of development must be stopped.

Zaighum Abbas, an academic and activist associated with Asian People’s Movement on debt and development said that “climate change can’t be addressed without the radical transformation of capitalist production. He added that the environment is destroyed primarily by bigger corporations which have prioritized profits instead of the environment.” 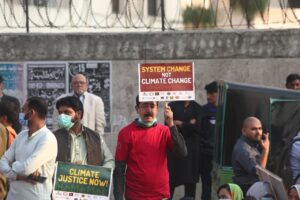 Haqooq-E-Khalq Movement’s Ammar Ali Jan said that the increase in smog in Lahore is because of no regulation of bigger industries in the city. He added that it is no solution to close the brick kiln industry, it deprives the workers of jobs in this sector. Ammar Jan stressed that the brick kiln industry should be shifted to new technology such as zig-zag which is more environmentally friendly and industries must be regulated in a way that they are penalised for breaching environmental protocols.”

It is important to note that on the occasion of this year’s COP26 Conference Actions have peaked across Asia to demand climate justice. Thousands of people have joined in more than 500  simultaneous actions in seven Asian countries on November 8th. Speaking at a similar action in Manila, Philippines, Lidy Nacpil, the coordinator of the Asian People’s Movement on Debt and Development (APMDD) said that: “We want to send a powerful  demand to the countries at COP26 to implement rapid and just transition out of fossil fuels and for rich countries to urgently deliver adequate climate finance to the Global South.”